Welcome, dear students, to the Whole Grains 101 class! You’ve heard the terms, you’ve seen the marketing, you’ve heard the media rant about WHOLE GRAINS and their benefits… but what does it mean, and why should you care?

Unique Facts to get started:

The bottom line: a whole grain product is one that is made with all the edible parts of a kernel of grain – the whole sha-bang! The more processed the grain is, the more nutritional value lost, the more dead the food becomes.

Here’s a picture that shows the various parts of the grain:

That is a wheat kernel, but the concepts of whole grain will carry through the other varieties as well. The three edible parts of the grain are the Bran, the Germ, and the Endosperm.

Bran: The outer layer
This contains a lot of nutritional value. In this little shell, you can get protein, thiamine, riboflavin, potassium, niacin, vitamin B6, Iron, Magnesium, Phosphorous, Zinc, Copper, and Fiber. In fact, this is where the majority of the fiber of “whole grain” products will be found. Yes, lovely fiber – helpful for keeping your system regular, helping with cholesterol, and cleansing your intestinal tract. Good stuff! You can find Wheat Bran sold at some stores – just the rough, fibrous parts of the wheat. I still say go for the WHOLE grain, but if you need some extra fiber, that’s a viable option.

Germ: The baby seed
This is what would sprout a new plant if you were growing or sprouting your wheat. It is a concentrated source of nutrients – that little power house would have to fuel a whole new plant someday if it was planted! It is a complete protein source, and also carries other nutrients such as Thamine, Phosphorous, Zinc, Manganese, Selenium, Vitamin B6, Folate, magnesium, Copper, and Fiber. The germ is a good source of vitamin E, and wonderful antioxidant to protect your body from toxic derivatives created from damaged cells. Why would you want to give up all of that?!  And, like Wheat Bran, you can find Wheat Germ sold in stores.

Endosperm: Also the “kernel”
This is the bulk of the seed’s volume, and it contains relatively little in the way of vitamins and minerals.

So when you buy white grains – white pasta, white bread/buns/tortillas, white rice… it has had the bran removed, and probably the germ as well. What then, class, does that leave us?

The Endosperm! That low-nutrient left over part, where over half of the vitamin B1, B2, B3, E, folic acid, calcium, phosphorus, zinc, copper, iron, and fiber are lost. That is why the government began requiring grain companies to “enrich” their products in 1941 – they are adding back synthetic (man-made) versions of the natural health that used to be there, but often in smaller amounts that what was in the original germ and bran. Is this as natural and bioavailable? The jury is still out…

So why would anyone want to process the beautiful, nutritional, lovely whole grain??  When you use just the endosperm, what you’re left with to get the soft white breads and pastas.  It may be pretty; it may be soft; but I call it GLORIFIED SUGAR because it’s about as nutritionally depleted and can have a similar effect on your blood sugars.

Centuries ago, white flour was for royalty and more expensive because of its soft delicacy.  Whole grains were coarse and for the poorer classes.  Funny how these days, you now have to pay more for the whole grain because it’s an “added value” marketing perk!

Whole grains are a whole package. In addition to the multiple vitamin, minerals, and fiber stated above, studies are finding more health components: within the whole grain, antioxidants, lignans, phenolic acids, phytoestrogens, and other phytochemicals may help reduce the risk of heart disease, cancer, and diabetes.

The Whole Grains Counsel lists some of the commonly used whole grains. If you’re bored with wheat and rice, or are gluten-sensitive, you may see some fun alternatives to try: 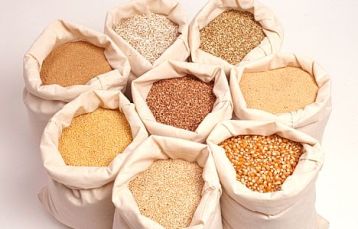 So that sums up the basics of Whole Grains 101!

Whole Grains 102 will cover how to tell if you’re getting a real whole grain. “Wheat bread” may not be all that you think it is! And in 103, I’ll get to that topic of oats – different types, and why I think oat groats and steel-cut oats are worth looking into. And if you’re looking for an advanced class, I’ll be bringing you Whole Grains 201: Sprouting!

This site uses Akismet to reduce spam. Learn how your comment data is processed.